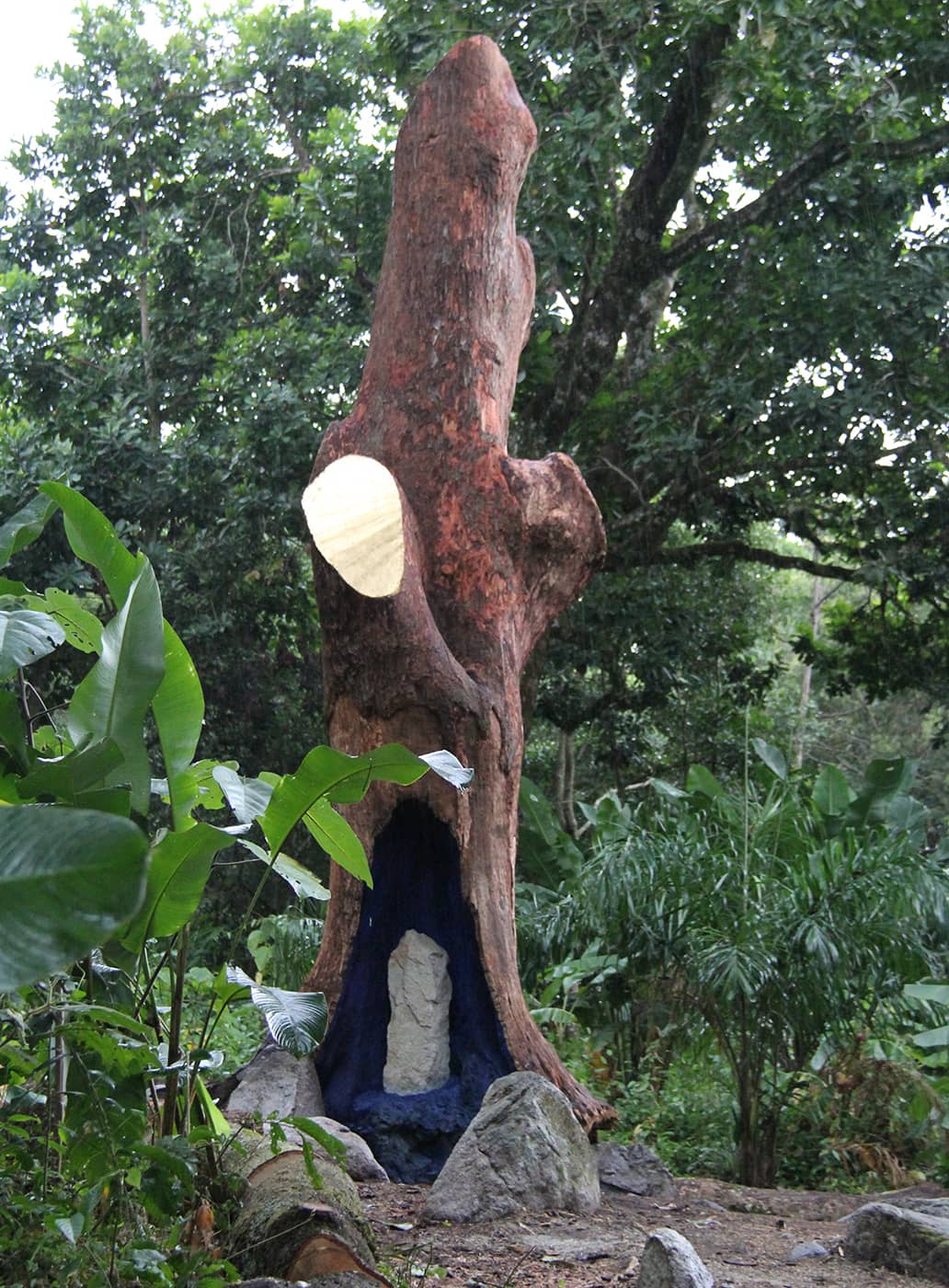 This artwork engages certain formal aspects that can be found in my other outdoor pieces, but digresses in one fundamental aspect. This digression is caused by the departure from strictly formal qualities and my venturing into symbolistic paganistic ritual, by the carving of a niche where I place a ‘sacred female anthropomorphic stone’, like a seed, inside a womb like ‘basilica’ or arcade, reminding the viewer of the divine nature of creativity. This singular illustration of a Genesis, like the modelling of Adam out of clay, alludes to the creative powers of art, and to the world of our imagination when confronted by a potentially divine image. Is it a goddess or is it an image of a deceased woman buried here for some votive or unknown reason? Why did I feel the need to cover the inside of this grotto with an intense lapis lazuli or Yves Klein blue pigment? Is this blue a symbol of divinity as in the cielings painted by Giotto in medieval Europe?
This fragment from the sculpture’s base is complemented by the multiple angles produced when I sawed off the branches into five astral points that reflect the sun on their gold leaf colored surfaces. Here all that is superficial is pared away leaving only the essential. I think in this stylised approach there can also be an unconsious desire, comparison and dialogue to the small figurative marble statues produced on the Greek Cycladic islands five and a half thousand years ago. Undoubtedly something of all this made its way into my work. Maybe I have sought to represent references that have been present in my real and imaginary life, a life spent between the great art and architecture of Europe, where I drew in the galleries, medieval churches and squares. As in Latin America, looking at ancient artifacts and the remains and relics of ancient civilizations. I have always felt myself to be equally part of both traditions. Whatever the purpose, or striving after meaning, I guess my art is inevitably an invocation, a bringing together, a synthesis of my dual traditions and heritage; in as much as it is a personal conception and expression of beauty through any power of perception I might have aquired as an artist.
Sacredness, beauty and truth have always been relative to the time one’s living in and to the individuals who percieve it. One thing that is undeniable however, is that art always shows us ourselves. Similarly, art strives to represent a world in which past and present coalesce, a world of the imagination where the final product is just as important and directly related to the philosophical content; at the very least, that is my aim.